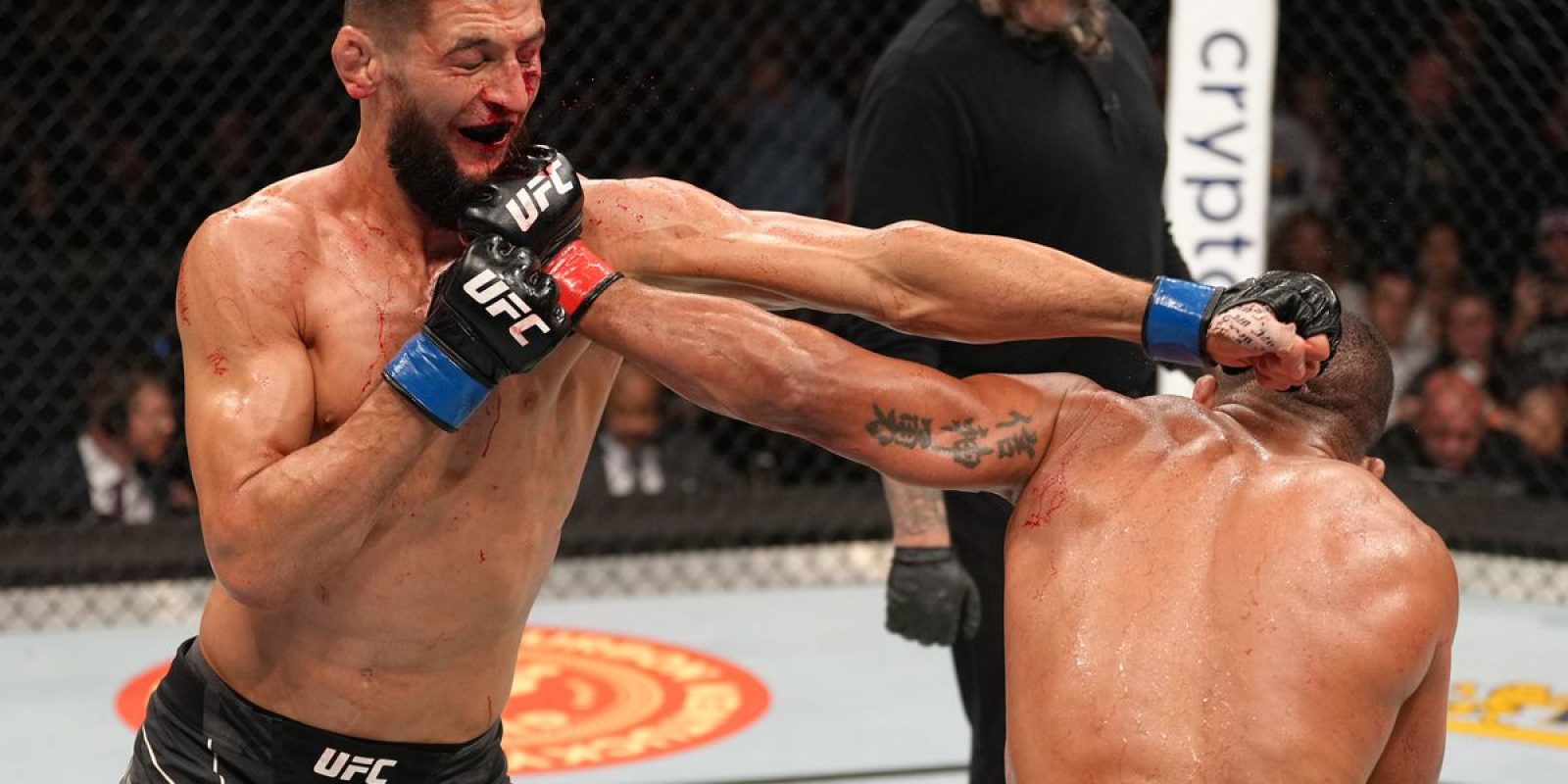 First and foremost, an achievement: Aleksei Oleinik finally got his 60th win. On my betting guide blog at PickinWinners.Org, I stated that Vanderaa is typically fat and out of shape, with a tendency to get out grappled. I also highlighted Oleinik’s grappling prowess over an opponent like Vanderaa. Oleinik’s striking has clearly regressed into throwing weird looping punches with no intent to disguise them whatsoever, and while walking Vanderaa down he looked ready to teeter over if the wind blew in the wrong direction. It was a very technically strange fight to watch, especially once it got to the ground; Jared Vanderaa was so out of his element. He looked to have had a choke locked up, until Oleinik found himself on top and finished Vanderaa with a neck crank. I don’t see much of a future for Vanderaa, as he’s most likely going to be cut. He should’ve taken his MMA career more seriously, honed his craft in the gym, and focused more on his overall fitness. I don’t see much of a future for Oleinik at 44 years of age either; however he says he won’t be doing this much longer, just another five to ten years.

Mickey Gall got slept by Mike Malott. That fight was shocking, as Gall is a veteran of the game and it was Malott’s debut. Malott trains at Team Alpha Male, a great gym run Urijah Faber. Malott must’ve grown up watching CM Punk and wanted to avenge his loss to Gall. He did so in devastating fashion in a fight that was really close up to that point.

Ian Garry walked away with a win, but not in the way everyone expected. Anyone active on MMA Twitter, or the sports books, would’ve known Ian Garry by knockout was what everyone was waiting for. The Irish youngster is a wannabe McGregor, clearly, as he uses Conor McGregor quotes any time someone hands him a microphone. He doesn’t hold the same skills or likability as a young Conor, but there is potential to be entertaining if he can add variety to his striking. He relied too heavily on front kicks and jab-cross combos which his opponent Darian Weeks was easily able to read and defend close distance clinch Garry against the cage.

Mackenzie Dern and Tecia Torres put on another entertaining fight, which ended in a split decision. The most entertaining round, in my opinion and as a fan of Brazilian jiu jitsu, was the second. Dern was incredible from the moment she jumped guard and then attempted a standing kimura. Between the grappling game she already possessed and the massive leap in her striking skill from her last performance, Dern proved that she’s ready to move up. I’d like to see her fight Yan Xionan next. I called Mackenzie Dern to win by decision on our betting episode of Pickin Fights, when my cohost Tom picked Tecia Torres. Also, new betting strategy from Tom:

Sitting on the cage as Gil Burns walked out, next to henchman Darren Till, basked in green light made Khamzat Chimaev look like a James Bond villain. Utterly confident, about to do battle with a foe he deemed unworthy. Thankfully, Gilbert proved Khamzat, as well as fans and bettors across the world, wrong. Many people expected Khamzat to steamroll Gil on his feet, follow him to the ground and turn him to mincemeat within the first round. Instead, Gil gave Khamzat the hardest fight he’s experienced so far, and Khamzat wore it on his face leaving the octagon. Khamzat did knock down and takedown Gilbert, but he didn’t want to stay on the ground with him- is it because he respected Gilbert’s BJJ, or because he thought he would achieve a flashy, standing, highlight reel KO over the number two contender? Either way, Gil and Khamzat had a war in every sense of the word. They both landed brutal shots and had their moments. Many fighters and coaches took to Twitter to say that Gilbert Burns won the fight. Is there some actual weight to this argument, or were they saying that because not being finished by Khamzat was a moral victory in and of itself? Very curious to know your answer. Let me know on Twitter @pickinKeith.

Part II Of An Inevitable Trilogy

Aljo vs Yan 2 was quite a different fight fro the first time around. Rounds 1, 4 and 5, in my humble opinion, should’ve been very clearly scored in Petr Yan’s favor. Dana White agrees, going so far as to say the judges messed up on this one. Yan performed better in those rounds with his striking as well as stuffing Aljo’s numerous takedowns. Only argument I could see for Aljo winning round 1 was with good body work via kicks. There were definitely clear moments in rounds 2 and 3 that set this fight apart from Yan and Sterling‘s first meeting a little over a year ago, in particular when Aljo achieved two of his twenty two total attempted takedowns, and controlled Yan on the ground for over six minutes. He had almost no control time in the first fight and was utterly dominated. Aljo also lived up to his self proclaimed “human backpack” name as a majority of that time came while he had all hooks in from behind Yan, looking for a rear naked choke. Yan feels robbed- I kinda do too, and not just because I had Petr Yan to win by decision. I am personally a bit of a Yan fan and was looking forward to him putting on a clinic the way he did in his first fight against Aljo. Yan also wants a rematch, and to that I say, let someone else step in now. Aljo has no excuses not to be an active champion now; he got his neck injury taken care of. He wants the Dillashaw fight, but if it was up to me I’d like to see him fight José Aldo in a few months time.

In most movies, you can kill a zombie with headshots. Alexander “The Great” Volkanovski showed us that the same rule applies to real life, too. Chang Sung Jung, better known as the Korean Zombie, stood about as much of a chance as a reanimated corpse. Volk was too much for him- he can do it all, however what was most impressive was the improvements he’s made since his last fight. Against Brian Ortega, Volk switched up his attacks proficiently, going from body to head, head to body, body to head to leg kick. Against TKZ, he did it even better, faster, and with more power. TKZ isn’t nearly as much of a submission threat as Ortega, so Volk attempted more takedowns and flexed his old rugby tackling skills.

Going into the second and third rounds, after a barrage of attacks from Volk, TKZ couldn’t find his stool and instead sat on the canvas. After battering his face, Volk looked remorseful as the fourth round began. His facial expression was that of guilt, as if to say, ‘someone please stop this before I truly hurt this man, he is too tough for his own good’. Finally, Herb Dean, having learned from refereeing Volk vs Ortega and letting it go on for far too long, decided to stop the fight after a final, brutal combination from Alex The Great. Had he not, we may have seen a commercial for a class action lawsuit in the future, with Herb’s picture and a “Was this man an official in your MMA fight? If so, you may be entitled to compensation” voiceover. Herb Dean has allowed many fighters to sustain what’s likely to be permanent brain damage, and didn’t want to add TKZ to that list. Unfortunately for TKZ, this was his last shot at the featherweight title barring something miraculous. It was astonishing he got the fight to begin with, and proved that timing and circumstances are everything in life. He did say, in Korean, and was actually missed by his translator, that now he knows he will never be a UFC champion, that “Volk is an insurmountable wall” and that it may be time to step away from the octagon. Seeing him break down and cry after speaking to Joe Rogan was simply sad, as he waited so long for the opportunity; he hadn’t been in a title bout for nine years. If this is the last we see of The Korean Zombie, nothing but respect. The biggest question leaving the bout then, is who does Volk fight next? Most likely an end to the trilogy with Max Holloway, in which Volk is already 2-0. There isn’t much competition for him in the division besides that. Nowhere to go but up… up a weight class. I’d like to see Alexander Volkanovski take on the winner of Charles Oliveira vs Justin Gaethje and achieve the rare champ-champ status.

Let me know what you think of my reaction to this well put-together card, my hopes for future fights, and jokes on Twitter @pickinKeith. For future cards, check out my betting guides at PickinWinners.Org and our show Pickin Fights on YouTube (we had a great week betting this card [as usual] and would love to help you make money).