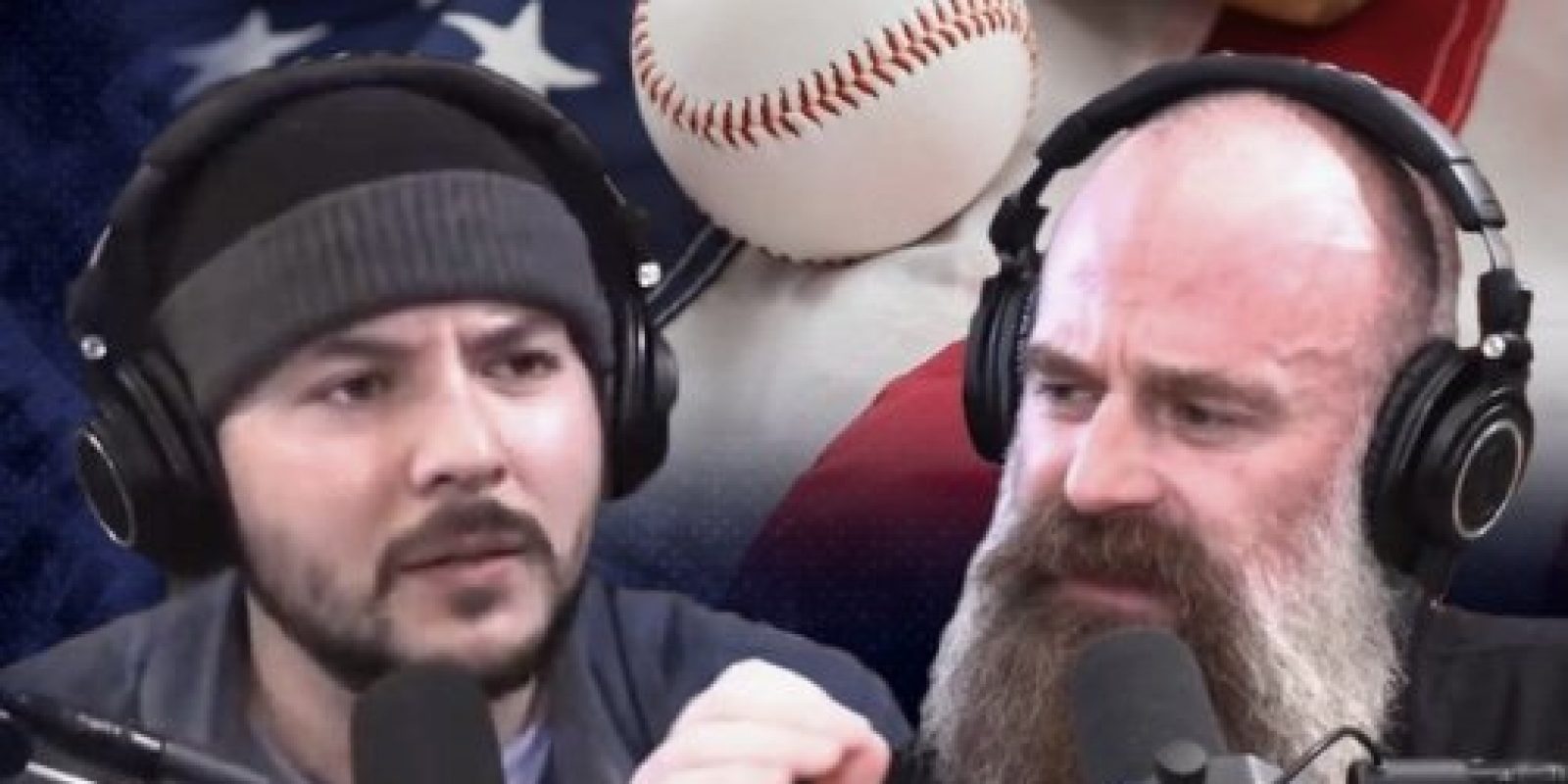 This article was inspired by a contentious discussion this week between Jack Murphy and Tim Pool. We’ll get to that exchange in a bit, but first let me lay the groundwork for why Tim Pool is ABSOLUTELY right and Jack Murphy is DEAD WRONG!

“I just want my kids to have it better than I had it.”

On its face, this quote seems not only harmless, but practically a no-brainer, right?

This is what I’ve heard my grandparents and parents—and even my generation—talk about with pride as they try to build a culture and provide a future for their children. A future that includes a college education, a cushy job with a 401(k), a home with a picket fence, and 2.1 children.

Have you been looking around?

What’s the result of this mentality?

What’s the outlook for our sons right now?

You really think the next generation has any chance of being better off than we were given the current trajectory?

Grown men have tried to set their sons up for success, but they have turned them into soft, helpless little bitches in the process. And here’s why:

Men are going about “I just want my kids to have it better than I had it” ALL THE WRONG WAY!

Men are trying to set their sons up so they don’t have to struggle like they did when they were coming up as young men. But the struggle is what hardens you and makes you into a man. A REAL man.

My youngest son learning to ride a bike provides the perfect example of this.

For years, bicycle manufacturers and parents have sworn by training wheels as the best and quickest path to learning how to ride a bike for a child. But training wheels are terrible and only prolong and distort the learning curve. Yet there they are on damn near every child’s bicycle in production.

My youngest son was riding a two wheel bike by himself before the age of five because he never rode a bike with training wheels. His first bike was when he was two years old. It had no pedals. Just two wheels, handlebars, a seat, and his Fred Flintstone feet.

At two years old, he was running as fast as he could and then lifting up his feet to balance on two wheels. It took a couple of years to be able to incorporate that balance along with pedaling a two wheel bike, but he was way ahead of his peers. And honestly, even the process of getting him confident in riding and pedaling on his own took a fraction of the time it took with my older two children, who started on bikes with training wheels.

Then, when he was 6, we went to Central Park and rented bikes for a leisurely family afternoon. The only bikes they had for his size had training wheels on them. He had been riding a bike for two years, but you would’ve sworn he had completely forgotten how to ride a bike. The training wheels fucked with his head. All of a sudden, he was leaning on the training wheels and struggling to pedal and stay upright. He was panicking and fell multiple times. Crazy, right?

Luckily, we found a gentleman in the park who had a pair of channel locks for his food cart. We loosened up the training wheels and flipped them horizontal so they were out of the way. Like a duck to water, Jace was himself again, cruising around Central Park and pulling away from the rest of us with his newly restored confidence and speed.

“What if I can’t do it without the training wheels?”

Every child who’s ever learned to ride a bike with training wheels.

That’s why parents have to trick their kids into thinking they’re still holding the seat when the kid finally starts riding on his own because as soon as he recognizes that he’s on his own, panic sets in and all of a sudden he somehow loses his balance. But if he thinks daddy’s hand is there, even if it’s not, he magically balances himself.

I know that probably seems like an over used quote at this point, but it seems like it needs to be repeated ad infunutum—especially now—because you’d be hard-pressed to find an era with weaker men, or more of them.

I don’t envy the positions many men find themselves in raising boys, especially teenagers, under the current circumstances.

And that brings us to this week’s controversial exchange between Tim Pool and Jack Murphy—a great distillation of what I’m talking about. Jack wants his teenage children to have the opportunity to fulfill their goals and dreams and what they felt was promised to them under the pre-plandemic paradigm.

I get it. What we thought was reality two years ago has been flipped on its head and there’s a natural tendency to want to cling to what was once promised. But in many ways, what was promised was a lie whose time has run out. Those days are all but gone and if they aren’t completely gone yet, they are certainly numbered. It is time to face some very harsh realities and adjust priorities.

The world ain’t what it used to be. Stop pretending like it is.

We have become so entitled, even those of us who look down our nose at what we call “entitlement culture,” that we don’t even recognize when we are living in luxury and acting like it is a foregone conclusion. Somehow we think it is OWED to us. To think that a man would hold vehement opposition to what could be a dangerous medical procedure (ahem experiment), but then be on the fence about letting it be conducted on his children because of sports and college is unfathomable to me.

I have already seen this unfold before my eyes as I watch my children’s friends swear up-and-down that there’s no way they would let that stuff into their body, only to change their minds when it means they won’t be able to go to football games or concerts or parties. My kids, on the other hand, either find another way, or forgo the luxury. Their principles and their bodily autonomy are more important than having the luxury of doing things that half the world’s population wouldn’t even dream of.

It’s all about perspective and priorities.

When you lay the proper foundations, the priorities tend to align themselves without much effort. But when too much emphasis is placed on luxury, it can become very tempting to sacrifice true freedom for these perks. When you stand on principles, though, as difficult as it may be and as tempting as the perks may be, you find that the choice is simple. Even if it means giving up nearly everything and living a life reminiscent of 100 or 200 years ago, it is still better than being a pharmaceutical lab rat.

People may not want to hear this, but this is the type of mentality that emboldens and empowers the Larry Nassars and Harvey Weinsteins of the world. People who don’t know how to say no because they’re afraid of losing the perks that come with going along to get along.

So how do we create more, stronger men?

Take the training wheels off. Better yet, never put them on in the first place. Let boys and young men fail. Let them get hurt. And take risks. It’s OK to be nearby in case they need a hand, but don’t hover. Let them learn that they can do it themselves. Let them learn that, even if they fail, they still live to try again, because when they succeed, they level up big time.

When we were at Hotep Nation Weekend a few weeks back, one of the OG hoteps, MG, relayed a story to us about an interaction he had with his young son. He wanted him to learn how to pump gas, so he let him do it without assistance. Everything went well up until the moment it was time to remove the nozzle from the car. As he was pulling the nozzle out, he was still squeezing the handle and doused himself in gasoline. This really upset him and made him never want to do it again.

Like the real king maker he is, though, MG took him to the gas station the next time it was time to fill up and had him do it again. He was very apprehensive, to the point of tears. MG let him cry it out and gather himself and reassured him that he would be right there and that he could do it. Piece of cake. But he didn’t touch the gas handle. He let his son do it all by himself again. But this time, he showed he had learned from his mistake. When he completed the task on his own without spilling a drop, it was like he had slain a dragon.

You see, if his dad had held his hand and helped him that second time, it may have taken five or six or 10 more times before he got the confidence to do it on his own without help. But because he was allowed to conquer his fear and conquer that task, his confidence is infinitely higher than it would’ve been otherwise.

This is what allowing boys and young men to make themselves truly vulnerable to failure and risk does.

It hardens them against the storms that will surely come. It strengthens them to be the protector and provider they need to be. And it gives them the confidence to lead the next generation and generations beyond.

There’s nothing wrong with wanting your kids to have it better than you had it. But what does that mean exactly? You have to really consider what you mean when you say this. Do you want your kids to lay around on pillows playing Fortnite 24/7, getting soft and diabetic from drinking sodas and eating Doritos?

Or do you want your sons to have it better than you had it because they have the strength, skills, and tools in their arsenal to be able to weather any storm and to have that confidence helps them to make the most of any situation?

Don’t let luxury, convenience, and a false sense of security cause you to compromise your core principles.

The dragons are at the gates. Time to start raising some dragon slayers.