Poppin’ Pills & Banning Weed – The NFL’s Controversial Use Of Painkillers 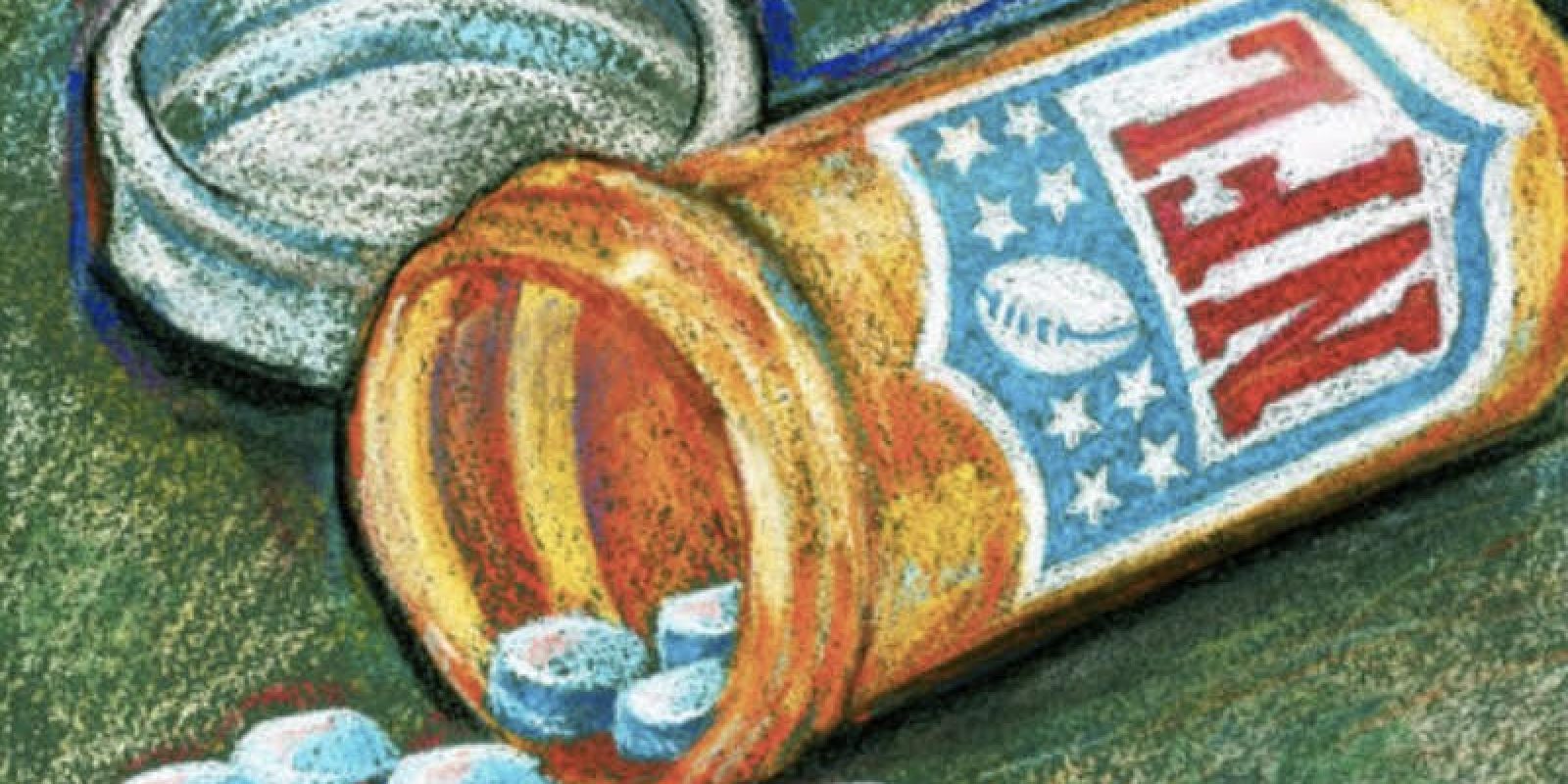 It’s no secret that the NFL gives their players painkillers before and/or throughout games, but most don’t know the negative impacts of this process. Meanwhile, as they handed out pills, the league also handed out suspensions for using marijuana. Let’s dive deep into this issue.

Recently, the NFL decided to make a major change in their banned substance policy. NFL players will no longer be suspended for their use of marijuana. This was never the case before. The NFL has suspended a plethora of athletes because of weed showing up in their system. It had been on their banned substance list for as long as I can remember, probably long before I arrived on this beautiful planet. The athletes were fully aware that testing positive for marijuana would result in them being suspended, so the players are to blame when being suspended for it.

However, should it have even been on the banned substance list to begin with?

The easy argument here is this: Marijuana has been illegal in the United States, so it makes sense that the NFL would ban it. That’s a fair point & I’m not necessarily arguing that in this article. My issue with the NFL banning weed comes with the fact that the league was simultaneously handing out pills like it was candy to these same athletes.

Here’s another easy argument: The painkillers are legal in the United States so it isn’t necessarily bad that they were dishing them out to players throughout the NFL seasons. I get it… but was the NFL abiding by the law while doing this?

The NFL Broke Federal Laws to Supply Painkillers to its Athletes

This isn’t new information but it isn’t discussed enough. It’s too important to brush over, due to the fact that former NFL players are now stepping up to say that their lives have been negatively affected by these processes.

In the NFL, the name of the game is winning football games. Careers are on the line every week, bonuses are on the line, futures are on the line… you get it. Winning is most important to every NFL organization as winning brings the dollars in. Such a will to win can often lead to controversial decisions, such as bribing your head coach to tank.

We see this often with the NFL’s concussion protocol. The NFL has always faced scrutiny when it comes to how they care about their players’ health. Years ago, team doctors were sending players back onto the field with clear indications of a concussion suffered. As long as the coach applied enough pressure, that athlete was getting back onto the field. After all, winning is the name of the game, right? The NFL cracked down on that & the protocol is much more strict these days, so why did they ignore this painkiller issue?

Even though a number of painkillers are legal in this country, there are still rules & regulations, as with anything else. The NFL decided to disregard many of these because winning and making money was more important, despite any possible negative effects on it’s employee’s lives.

From the Washington Post, discussing a federal lawsuit filed by former NFL players:

Federal law lays out strict guidelines for how teams can handle and dispense prescription drugs. The sealed court filing, which includes testimony and documents by team and league medical personnel, describes multiple instances in which team and league officials were made aware of abuses, record-keeping problems and even violations of federal law and were either slow in responding or failed to comply.

In 2017, this lawsuit was filed. 1,800 former NFL players got in on it claiming that they’ve suffered long term joint & organ damage. The former players claim these issues come as a result of improper use of drug distribution from their NFL teams.

The NFL clearly didn’t care about their painkiller problem. As part of the lawsuit’s evidence, the filing shows that every team doctor interviewed has testified that they violated one or more federal laws regarding painkillers while working as NFL team doctors. Former president of the NFL Physicians Society testified that as of 2010, the majority of NFL teams had team trainers controlling the prescription meds when they should not have.

Evidence From The Lawsuit

The evidence in this lawsuit is shocking, even with already low expectations for the NFL. One trainer sent an e-mail saying:

“Can you have your office fax a copy of your DEA certificate to me? I need it for my records when the NFL ‘pill counters’ come to see if we are doing things right. Don’t worry, I’m pretty good at keeping them off the trail!”

In the calendar year of 2012, the number of painkillers given in the NFL averaged out to 6 or 7 per week per player. This is a way higher number than people originally thought, which proved that there was an issue in the NFL regarding these pills & injections. It’s important to consider the fact that these numbers might even be under-reported due to team doctors being weary of the ‘pill counters’ coming by.

The doctors were also accused of breaking federal law by crossing state lines with these drugs when traveling to away games. The teams & their doctors allegedly disregarded the DEA’s guidance when it came to storing, tracking, & transporting these painkillers. It’s a no brainer that stronger drugs were used in cases where teams needed to get a particular guy back onto the field.

Many players have stated that they were given drugs without even being told what they are taking, the side effects of the drug, or any other information that should be given prior to injecting somebody with “treatment”. This is obviously problematic & I’d hope the NFL is no longer doing that.

The issue here is that some of these painkillers, if not most of them, are highly addictive & will stick with these athletes later down the line. But the NFL doesn’t seem to care about that as long as all the stars are able to participate on Sundays without feeling any pain.

The best up-to-date study on the relationship between painkillers & former NFL players has some wild conclusions. The study surveyed 644 former players & here’s a list of the results: Over half admitted to using opioids during their NFL careers, 7 of every 10 said they abused/misused the drugs, 22% of them said they took at least 6 pills PER DAY during their playing careers.

The most shocking and hurtful discovery from the survey is this next statistic. 7% of the 644 former players reported that they are still actively using opioids even in retirement. 7% of 644 players is more than 4 times the rate of the general public’s opioid use at the time of the study.

It’s a shame that the NFL would give these pills & injections out so freely, with no regard for their players’ health & in some cases without even giving the players the proper information on the drugs’ effects & possible side effects.

The league needs to be held accountable for it.

The fact that the league had weed banned while doing this makes it even worse. Weed could have helped these athletes naturally heal themselves, but instead the NFL pushed them away from that & fed them big pharma’s contraptions instead. The retirees are now paying for it.

The only defense the NFL had to justify its weed suspensions was the fact that marijuana is illegal in most states in America. But, does that even justify it when we consider the league breaking federal laws to excessively distribute painkillers to its’ players? To me, it seems like big pharma cut the check & the NFL also benefitted because the players couldn’t feel the pain they endured throughout games & seasons.

At the end of the day, it’s clear that the NFL puts themselves over the players. The league finally lifted the marijuana ban, but with so many retirees hooked on painkillers, it might have been too little too late.

Next week, I’ll discuss weed as a natural healer as well as other holistic remedies. I’ll highlight former NFL running back Ricky Williams, who dealt a lot with the NFL’s weed ban, eventually leaving the NFL for the CFL. He’s an advocate for holistic health. Make sure you subscribe here & follow Jianchor on Twitter so you don’t miss it or any other articles.